Speed and Safety: Raiseboring Provides the Solution
A look at current trends in a technology that has changed development methods for ever
By Simon Walker, European Editor 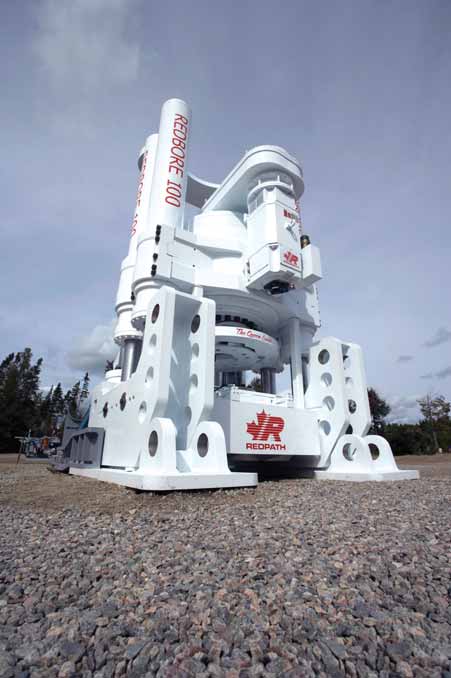 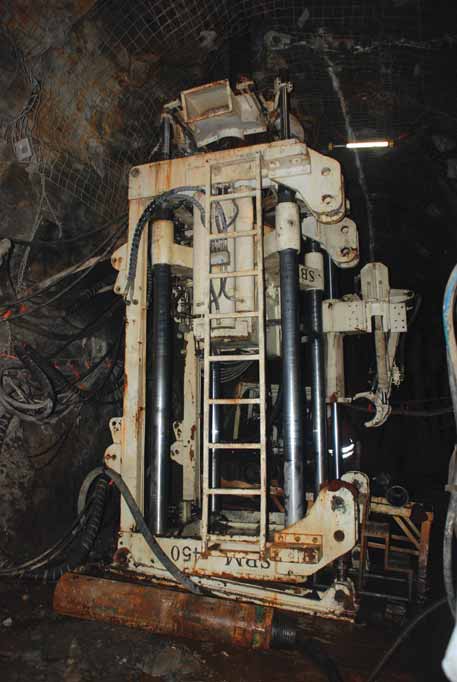 The SBM 450 raise drill used by Peru-based Tucomi on a recent contract in Australia.
(Photo courtesy of Tumi Contratistas Mineros) 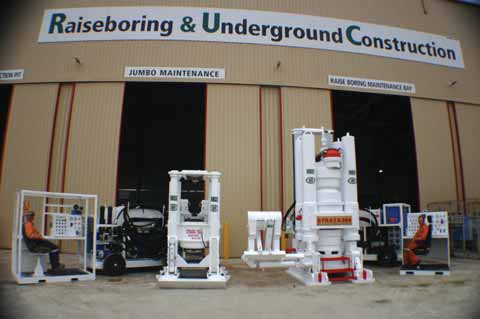 Although mechanical tunnel excavation dates back to the 19th Century, it was not until the second half of the 20th that mechanical raise-drilling became established within mining. Since then, it is fair to say, raiseboring and its spin- off techniques such as boxhole drilling have revolutionized the way hard-rock mining goes about its business, yet equipment supply is still in many ways a niche market, with relatively few companies specializing in the technology. Interestingly, a number of recent developments seem to have come from companies that use raise drills, rather than suppliers, as they see solutions to sitespecific needs, then adapt their machines to suit.

The two major selling points for raiseboring as a technique are undoubtedly safety and speed. Safety: the days of drillers having to build their own platforms on raise pins that have been bent out of shape by falling rock have gone, replaced by a machine that operates in-situ, increasingly under automated control. And speed: cyclic drilland-blast has been replaced by round- the-clock drilling, with even the need for time-consuming, custom-constructed concrete pads now being overtaken as machines become available that self-lock into their work site.

And, of course, there is the issue of product quality—in this case the profile and long-term stability of a bored raise or boxhole in comparison with that of its blasted forerunner. Put all three together, and it is easy to see why raiseboring is de rigueur in modern mining.

What's New
ME&MJ asked Marcus Eklind, manager of Atlas Copco's raise-drill division, for his perceptions on the current state of the industry, and on market trends. As the largest single supplier of raise drills, Atlas Copco's product portfolio covers more then 16 different models of its Robbins machines, its range including models for conventional raiseboring, boxhole boring and down-reaming at diameters from 500 mm up to 6 m.

Eklind said the company has experienced remarkable growth in its raiseboring business over the last five years. The global financial crisis obviously had a major impact, but the recovery has been both quick and strong.

"The trend toward larger and longer (deeper) raises is clear," Eklind said, adding that Atlas Copco has delivered and is currently building more large raiseboring machines—units with a 4 m-plus capability—than ever. "The larger the raise, the bigger the risk, and therefore the drive and control system plays an important role," he said. "Atlas Copco offers both hydraulic and electric drives controlled by a common RCS [Atlas Copco's computerized Rig Control System] platform."

Eklind explained the principal differences between hydraulic and electric drive systems in the raise-drill context. "A hydraulic-drive motor system offers variable speed and excellent torque- limiting control, and has the lowest inertia of all drive systems," he said. "Neither does it subject the drill string to high stall torques—something that extends the lifetime of the expensive drill string.

"The electric drive used by Atlas Copco is a newly developed variable frequency drive that also offers variable speed and excellent torque-limiting control. As the electric drive is much more efficient, a machine equipped with electric drive draws less power, and this can be very important depending on where the machine is being operated."

Machines Get Smarter
Raise drills are simple machines, aren't they? They just push, pull and turn drill pipe. Well, not exactly, as Redpath's manager for raiseboring, Dan Kelly, explained. "We are always trying to improve on what is out there in the market, trying to get the best of everything in one package," he said.

With its Redbore 100 named the world's most powerful raise drill, the company has certainly raised the bar in this direction at least. Aside from its 447-kW (600-hp) variable-frequency AC drive system, the machine also has upper and lower hydraulic wrenches for pipe handling, Kelly said, pointing out the sheer weight of the individual rods meant that this was now essential.

In Australia, meanwhile, RUC Cementation has recently added two machines to its range, the Strata 150 and Strata 960. The company's executive director, Lawrence Newnham, said the 150 is a multi-purpose rig designed for raising, boxholes and slot-hole pilot drilling, while the 960 has a total lift of 960 metric tons (mt) and an output torque of 1,100 kNm. This allows it to use a new generation of drill rods which have the 11-in. DI 22 thread connection on a 14-in.-diameter rod. Developed many years ago with a well- proven thread configuration, he added, this connection has never been used up to now because the make-up torque exceeded the capabilities of earlier machines.

Improved machine mobility is becoming increasingly important, according to Atlas Copco, the company having developed its Robbins 34RH C QRS. (Quick Raisebore Set-up) unit in response. The machine is carried on an integrated diesel-powered crawler, with in-place stability provided by roof stingers and hydraulic jacks.

Successful applications of this machine include Lundin Mining's Zinkgruvan operation in Sweden, where it is used to down-drill 25- to 30-m-longslot pilot holes in panel stoping. In Mexico, Fresnillo uses several units to drill 1.2-m-diameter, 30-m-long holes at its La Cienega mine, the system having cut the time needed to install new raises by up to 75%, the company said.

Peru-based Tumi Contratistas Mineros, part of the Stu Blattner group, recently introduced a new, large machine, the SBM 1200. Equipped with 300 kW of hydraulic drive, it can handle raises up to 6 m in diameter, the company's executive manager, Marc Blattner, said. Its smaller SBM 450 can be switched between raiseboring and boxholing within an hour, he went on, adding that Tucomi is now looking into robotics for pipe positioning and is researching fully automated raiseboring systems.

"We are also working on a cutter that will revolutionize the industry," he said. "At the same time, we try to keep our machines simple so that any general mechanic can service them, keeping maintenance costs to a minimum."

The Challenges
Nonetheless, there are still constraints to where the technology can go, not least of which is the diameter/depth combination. "Some customers are asking for even bigger machines capable of pulling 6-m-plus raises at depths of more than 1,400 m, but the high cost of the drill string and the risk involved has put a stop to this up to now. To get $15 million-plus in capex approved when you risk losing 70% of it in one hole, that is a tough decision to take for any company's board," said Eklind.

His sentiments were echoed by others who contributed to this article, with both Redpath's Dan Kelly and Cementation Canada's Manager of raiseboring Dennis Martin, making the point that ground conditions are the biggest challenge now being faced by contractors as client companies seek ever larger and deeper bores. "Ground conditions are the key to whether a hole can be drilled or not," said Martin, while Kelly noted having good geotechnical information ahead of time is critical. "Clients need to have established the geotechnical data for the drill site by putting down a core hole well before boring is even contemplated, with those data interpreted by an independent consultant."

There is also concern amongst contractors that client companies are simply asking too much of the equipment currently available when it comes to specifying deep bored shafts and raises. A good understanding of what drill rods and other parts of the system can actually do is essential, they told E&MJ, and clients need to appreciate better what equipment can be expected to do, and under what ground conditions.

"You have to understand that the drill rods in a long hole are like a big elastic string," Martin said. "The whole string depends on the capabilities of the connections between the rods, and what they can handle.

"With the trend toward larger holes, the focus has been on joint technology—what works and what doesn't. And it is not a case of just beefing up the rod string," he said. "Going bigger on the in-hole hardware doesn't mean you can drill bigger holes."

"It is imperative for mine designers to understand that large-diameter raise drilling is subject to suitable, stable rock conditions over the full depth of the raise," Newnham said.

Recent Achievements
On February 13 of this year, Redpath completed a major project at Iamgold's new Westwood gold mine in Québec; at an initial 6.7-m (22-ft) diameter and 846-m (2,773-ft) deep, the new ventilation shaft is the longest and largest directionally drilled raisebore hole in North America, Redpath said. The contract was not without major challenges, however, as the company's Senior Vice President Michael Kelly acknowledged in a paper presented at the CIM's MEMO conference in Sudbury last October. Squeezing and spalling ground conditions over the first 125 m of the raise led to its diameter being reduced to 6.1 m (20 ft) over the remainder of the length, he said.

The company used its Redbore 100 machine for the task, and since completing the raise has moved it to North American Palladium's Lac des Iles mine in western Ontario to drill a 7.4-m (24- ft)-diameter by 690-m-deep shaft for rock hoisting.

However, the Westwood shaft ranks as the fifth largest in the world, with Aker Wirth claiming that its HG380 machine still holds the world records for the longest raise, at 1,260 m and, for the time being at least, the largest- diameter raise, at 7.1 m.

Cementation Canada has had a different challenge working on the new 5.5-m-diameter hoisting shaft at Northgate Minerals' Young-Davidson gold project, also in Ontario. Since the 7,500-mt/d-capacity shaft will be equipped with rope-guides and a koepe hoist, verticality within a tight tolerance is essential, Martin said, with the company having used RVDS (rotary vertical drilling system) technology from Micon Mining and Construction Products in Germany to guide the pilot hole.

Cementation is boring the 1,550-m deep shaft in three legs, he added, at 750 m, 450 m and 300 m each, with individual pilot holes for each leg. Access to the shaft is helped by the existing infrastructure on the property, which Northgate is redeveloping.

Raiseboring technology has come a long way since James Robbins built the first successful machine in 1962—a machine that was reportedly still working only a few years ago. For every headline-hitting bore, countless raises are drilled on a run-of-the-mill basis, showing just how important the concept has become to mainstream mining. Add 'saving costs' to 'safety' and 'speed' in the list of major advantages. 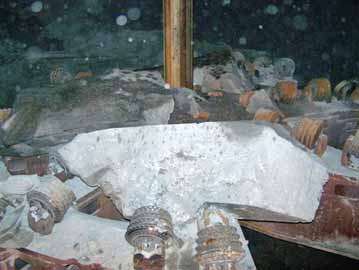 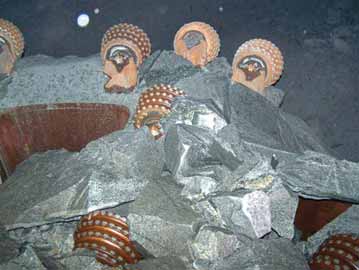 Good geotechnical information is critical to achieving success in large-diameter raises. In this case, the span allowed the face to peel during reaming.
(Photos courtesy of RUC Cementation)