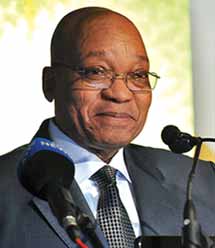 South Africa's President Jacob Zuma on startup of
a government-owned mining company: "Government
policy on minerals and miningdoes not prevent the
state from participating actively in mining, competing
with other companies."

The President of South Africa, Jacob Zuma, in late March 2011 announced the launch of a state-owned mining company. The announcement was incorporated into a speech at a sod-turning ceremony for the company's first mining project, the Valkfontein coal project. Valkfontein will have an initial capacity of about 840,000 mt/y.

The new company will be known as the African Mining Exploration and Finance Company (AEMFC) and will be a subsidiary of the State's Central Energy Fund. The ultimate goal will be to consolidate all state mining interests into this one vehicle. The AEMFC's current portfolio includes coal, uranium and limestone properties.

"We are today proving that indeed, the state is the custodian of the country's mineral resources on behalf of the people of this country," Zuma said. "The role of the state cannot merely be confined to that of a regulator. The state must actively participate in the mining industry to ensure our national interest is protected and advanced. As you would be aware, our policy is to build a strong mixed economy, where the state, private sector, cooperative, and other forms of social ownership complement each other, to achieve shared and inclusive economic growth.

"Government policy on minerals and mining does not make provision for the nationalization of mining assets, but it does not prevent the state from participating actively in mining, competing with other companies."

The AMEFC launch did not prompt specific response from mining companies active in South Africa. Subsequent to the launch, Mineral Resources Minister Susan Shabango offered assurances that the state company will not have any regulatory advantages.