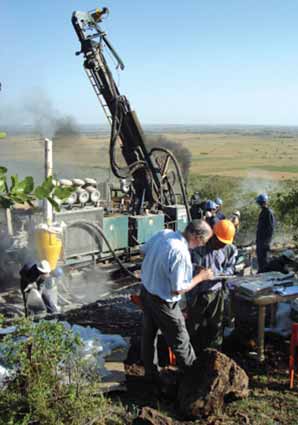 African Eagle Resources has received an updated economic model for its Dutwa oxide nickel project in northern Tanzania that evaluates both heap leaching and atmospheric agitated tank leaching and includes ore throughputs of up to 5 million mt/y. Capital expenditure estimates are $550 million for heap leach and $600 million for tank leach. Capital payback for both methods is between three and five years. Cash operating cost estimates are $3.37/lb of nickel produced for tank leach and $3.56/lb for heap leach. In all cases, the model assumes production of a mixed nickel-cobalt hydroxide intermediate product.

African Eagle Managing Director Mark Parker said the economic modeling for Dutwa indicates atmospheric tank leaching, rather than heap leaching, will give a better economic return. Final selection of the best process option will be based on the outcome of bench-scale and pilot- scale metallurgical test work now under way. A pre-feasibility study is scheduled for completion by the end of the third quarter of 2011.

Over the coming months, the Dutwa economic model will be further developed and refined to take into account the results of the current metallurgical test work and to assess the impact of producing a mixed sulphide intermediate product rather than a hydroxide and of using rail transport rather than road. The timeline for the project calls for initiation of its Environmental and Social Impact Assessment and completion a JORC indicated resource during the second quarter of 2011; completion of a prefeasibility study during the third quarter of 2011; completion of a definitive feasibility study by the end of 2012; project construction during 2013 and 2014; and first production in early 2015.

The Dutwa project is based on two deposits that form caps on the tops of low ridges 6 km apart. Together, the deposits contain around 850,000 mt of nickel with by-product cobalt.