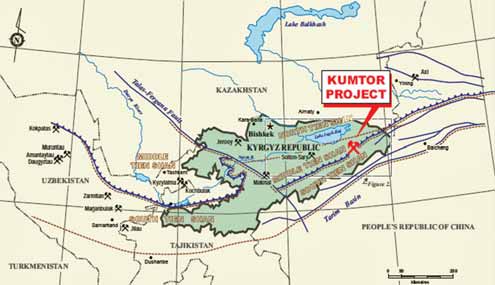 Centerra Gold is investing $405 million, including $244 million for sustaining capital, to expand production and extend mine life at its Kumtor gold operations in the Kyrgykz Republic. Capital expenditures will be mostly related to the maintenance or replacement of current open-pit mining equipment and expansion of the tailings management facility. Gold production will increase by about 20% to an average of 620,000 oz/y over the five-year period from 2011 to 2015. Life-of- mine net cash flow is now estimated at about $1.5 billion dollars.

The new Kumtor life-of-mine plan is based only on open-pit reserves. No provision has been made for production from underground development activities or from open-pit or underground resources. Mining production rates will increase from the current 430,000 mt/d of ore and waste to a peak level of 526,000 mt/d. Total tonnage mined from the Central Pit will be increased by about 30%, based on expansion of mining limits in the southwest wall of the SB Zone.

The ultimate pit bottom in the SB zone will be at the 3,618-m elevation, 24 m deeper than was previously planned. The ultimate pit bottom of the Stockwork Zone section of the pit will remain at the 3,722-m elevation. Kumtor's proven and probable mineral reserves totaled 6.3 million oz of contained gold as of December 31, 2010. The company expects to spend $12.4 million for ongoing exploration at Kumtor during 2011. The 2011 exploration program is focused on extending the underground SB Zone along strike and down dip and infill drilling of the inferred resource areas on both the SB and Stockwork Zones. Additional drilling is also planned on down-dip extensions of the Saddle Zone in the Central Pit and on the Northeast Prospect. An expanded surface regional exploration program will include testing targets on the Kumtor mining concession and also the Karasay and Koendy target areas.

Spending on Kumtor's underground development and infill drilling project during 2011 is estimated at $52 million.