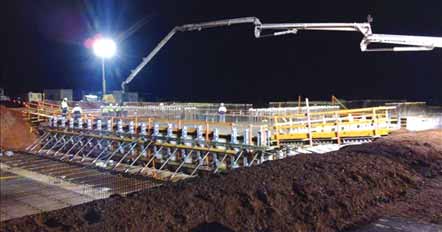 Construction may be finished by year-end for Stage One of the Karara iron ore project in Western Australia,
but Gindalbie Metals and China's Ansteel, partners in the joint venture, are looking at a possible expansion
to raise initial production from 10 million mt/y to as much as 16 million mt/y.
(Photo courtesy of Gindalbie Metals)

Gindalbie Metals reported in mid-March 2011 the Karara Joint Venture (64% Gindalbie and 36% Ansteel, China's second largest steel producer) has begun scoping studies on a proposed expansion of the Karara iron ore project in Western Australia from its targeted start-up production level of 10 million mt/y to potentially 16 million mt/y. Stage One of the Karara project is scheduled for completion before year-end 2011 at design production of 8 million mt/y of magnetite concentrate and 2 million mt/y of direct shipping ore. Early work on the expansion scoping study will allow the Stage One project development team to remain in place for the Stage Two expansion.

The planned increase in production can be accommodated by the existing rail, port, water and power capacity being developed as part of Stage One of the project. The 85-km spur railway line being constructed from Karara to Morawa, and due for commissioning in the third quarter of 2011, has a total capacity of 36 million mt/y, while rail upgrades being implemented for the line from Morawa to the port at Geraldton will also support the planned production capacity.

Gindalbie also reported capital costs to complete Stage One may be as much as 30% more than the previously announced estimate of A$1.975 billion. A review of project capital costs is scheduled for completion by mid-year 2011 and will be announced along with an update of estimated operating costs and the development schedule.

The Karara magnetite orebody has a JORC-compliant resource of 2.5 billion mt grading 34.1% iron, sufficient to support production of 30 million mt/y over a period of 30 years. Ansteel has signed life-of- mine off-take agreements for all of Karara's magnetite concentrate production and up to 3 million mt/y of its direct shipping ore. Ansteel and Gindalbie also are building a joint-venture, A$200-million, 4-million mt/y pellet plant in northeastern China to process half of the Stage 1 Karara magnetite concentrate production.