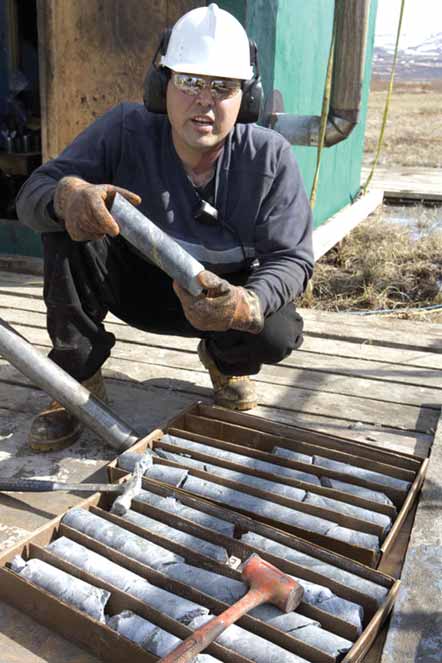 A technician examines core at the Pebble Cu-Au-Mo project in Alaska. A recent preliminary technical
assessment report estimates project development could cost as much as $4.7 billion in capex to produce
31 billion lb copper, 30 million oz gold, 1.4 billion lb molybdenum, 140 million oz silver, 1.2 million kg rhenium
and 907,000 oz palladium, over a 45-year period while mining just 32% of the mineral resource.
Sustaining capital requirements for a 45-year mine lifeone of three development cases studied in the
reportare estimated at $6.14 billion. (Photo courtesy of Northern Dynasty Minerals)
Northern Dynasty Minerals has received an NI 43-101 compliant preliminary assess- ment (PA) from Wardrop of the potential for development of the Pebble copper-gold- molybdenum project in southwest Alaska. Northern Dynasty reported the PA on its own behalf and, specifically, not on behalf of the Pebble Partnership, which includes Anglo American. Anglo American has a right to earn a 50% interest the project.

Regarding environmental and socioeco- nomic issues, the Northern Dynasty state- ment notes that, since 2004, comprehen- sive baseline studies have been undertaken in the Pebble project area, including along the transportation corridor to Cook Inlet, the marine environment in the area of the port site, and throughout the broader Bristol Bay region. "These studies have cost more than $150 million to date and resulted in an environmental and socioeconomic database whose comprehensiveness and depth is unprecedented in Alaska," Northern Dynasty states. "The aggregated findings and analyses of these studies, along with the Pebble Partnership's ongoing, long- term engagement with project stakeholders and federal and state regulators, are signif- icant corporate assets as it prepares the Pebble project for permitting."

The Northern Dynasty statement does not specifically address the concerted and well-publicized campaign of opposition to the project, which includes participation by environmental, fishing and some Alaska-native groups, as well as more than 50 jewelers, including Tiffany, Zale Corp. and Jostens, who have pledged to boycott gold from the project.

The Pebble PA outlines three mine development scenarios for 25, 45 and 78 years of mine life. The processing rate is projected at a nominal 200,000 mt/d, and initial capital development costs are estimated at $4.7 billion, excluding capital costs associated with outsourced power and road and port infrastructure. Cash costs for the 45-year reference case are estimated at $0.11 per lb of copper, net of byproduct credits.

The PA outlines an open-pit operation, with an initial mine life of 25 years and the potential to develop underground block cave operations at a mining rate of 150,000-mt/d beyond 25 years. The concentrator would employ conventional crush-grind-float technology and equipment to produce a copper-gold concentrate containing 26% copper and 18 g/mt gold, a 52% molybdenum concentrate, and gold doré. The PA anticipates construction of a molybdenum autoclave plant offshore to treat the molybdenum concentrate, thereby realizing enhanced value through improved pricing for rhenium and additional copper recovery.