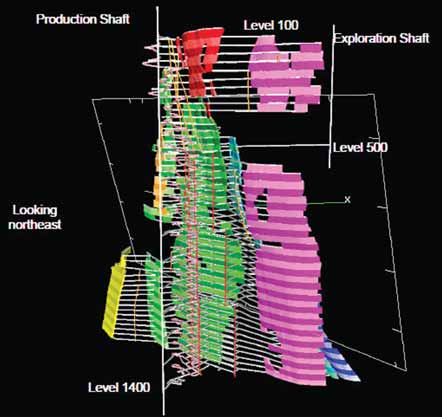 After receiving positive study results on its Éléonore gold project in Quebec and Cochenour project in Ontario,
Goldcorp will move ahead with development of both. Éléonore’s underground layout is shown here.
(Photo courtesy of Goldcorp)
Goldcorp has received positive study results for its two major Canadian gold projects, Éléonore in Quebec and Cochenour in Red Lake, Ontario; and the company’s board has approved full- scale development of both projects. “These projects are key components of Goldcorp’s next generation of gold growth projects,” Goldcorp President and CEO Chuck Jeannes said. “The positive results of these studies confirm our expectations for sustained, high- quality gold production from two very important areas in Canada—the historic and prolific Red Lake camp and an exciting new district in the James Bay region of northern Quebec.”

Éléonore: An updated pre-feasibility study for Éléonore calls for a doubling of previously planned plant throughput to 7,000 mt/d and production of an average of more than 600,000 oz/y of gold over an approximate 15-year mine life. The deposit remains open at depth, and the mine plan will be optimized based on future exploration results. Life-of-mine cash costs are expected to be below $400/oz. Capital expenditures are expected to total $1.4 billion. Initial gold production is planned for the fourth quarter of 2014.

The significant increase in Éléonore project scale is based on simultaneous development of two separate, vertically stacked mining operations, each targeting different areas of the orebody. The first will target production in the upper portions of the Roberto deposit above 650 m and will be accessed from both an exploration shaft currently under development and a decline from surface. The second will extend to a depth of approximately 1,400 m and will access the deeper ore by way of a second shaft.

Beginning of construction of the second shaft, processing facilities and related infrastructure will proceed immediately upon receipt of the Environmental and Social Impact Assessment permit expected in mid- 2011. Initial gold production is expected in the fourth quarter of 2014.

Goldcorp has already achieved several important Éléonore project milestones in 2011, including declaration of an initial proven and probable gold reserve in excess of 3 million oz and the signing of a collaboration agreement with the Cree Nation of Wemindji. Current project development includes full-face sinking of the planned 750-m-deep exploration shaft, which as of late February was at a depth of 130 m.

Cochenour: A scoping study of the Cochenour project has confirmed strong economics for development of the Bruce Channel deposit at Red Lake. Simultaneous access to both the top and bottom of the orebody is being advanced through the widening of the existing Cochenour shaft and continued construction of a 5-km-long rail haulage drift from the existing Red Lake underground workings.

Ore from Bruce Channel will be transported via the high-speed drift and processed at Red Lake’s existing Campbell milling facilities at a rate of approximately 1,500 mt/d. Estimated life-of-mine gold production is expected to average between 250,000 and 275,000 oz/y over an approximate 20- year mine life at a total cash cost below $350/oz. Initial capital expenditure for the project is estimated at $420 million, with first gold production anticipated in the fourth quarter of 2014.

Goldcorp announced an initial gold resource for Cochenour of 2.7 million inferred gold oz in February 2011. The company believes neither the grade nor the total ounces of this estimate are reflective of the potential of the deposit, which will be formally established by additional, deeper drilling. For construction and planning purposes, the company continues to estimate the project as a mineable deposit of 5 million oz of gold.

Surface drilling will continue throughout 2011, with the aim of delineating the upper portions of the Upper Main Zone, as well as further exploration of the upper extensions of the Footwall Zones. This work will be accomplished by up to three surface drill rigs drilling from McKenzie Island and additional drilling at the north end of the Cochenour property.