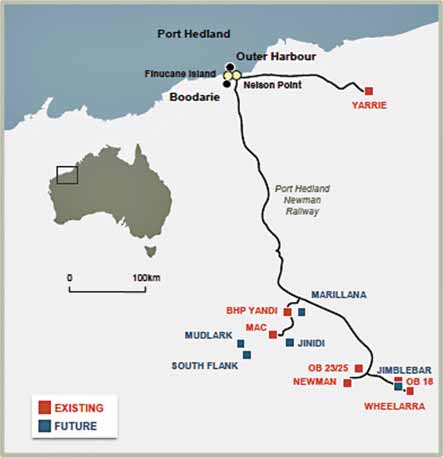 The iron ore projects are designed to deliver integrated BHP Billiton Western Australian operations having more than 220 million mt/y of capacity on a 100% basis, with first production expected from the new Jimblebar mine in early 2014. Jimblebar development is budgeted at $3.4 billion (BHP Billiton share $3.3 billion) and includes rail links and procurement of mining equipment and rolling stock. Jimblebar will have an initial capacity of 35 million mt/y, with embedded options for expansion to 55 million mt/y.

An additional $2.3 billion (BHP Billiton share $1.9 billion) will be spent to further develop Port Hedland, including two additional berths and shiploaders, a car dumper, connecting conveyor routes, and associated rail works and rolling stock; and $1.7 billion (BHP Billiton share $1.4 billion) will be invested in port blending facilities and rail yards to enable ore blending, the expansion of resource life, and preparation for the future growth of the business beyond the inner harbor.

Ian Ashby, BHP Billiton president– iron ore, said, “Our intent with these projects is to develop port capacity that, with subsequent debottlenecking, will allow us to fill our 240-milllion mt/y allocation in the Port Hedland inner harbor. We have intentionally overbuilt the ore handling facilities at Jimblebar and expect to incrementally grow mine production to ensure our port and rail systems are operated at full capacity during this debottlenecking program.”

In Queensland, three projects will add 4.9 million mt/y of metallurgical coal capacity, 100% basis. In addition, 11 million mt/y of port capacity will be developed at the Hay Point Coal Terminal.

A new mine, the Daunia mine, will account for 4.5 million mt/y of the new mine capacity and is budgeted at $1.6 billion (BHP Billiton share $800 million). First coal is expected in 2013. At the Broadmeadow mine, $900 million (BHP Billiton share $450 million) will be invested to extend mine life by 21 years. The investment will also increase Broadmeadow production capacity by 400,000 mt/y to a new total capacity of 4.8 million mt/y. The project is due for completion in 2013.

Stage Three expansion of the BHP Billiton Mitsubishi Alliance’s wholly- owned Hay Point Coal Terminal is budgeted at $2.5 billion (BHP Billiton share $1.25 billion) to increase capacity from 44 million mt/y to 55 million mt/y. This investment includes the replacement of the existing jetty to increase its ability to withstand high seas and winds. The expansion will include a new third berth, trestle, surge bins and out-loading conveyors. First shipments from the expanded terminal are expected in 2014.

BHP Billiton Metallurgical Coal President, Hubie van Dalsen said, “Subject to further approvals, this initial investment will be followed in the near term by the construction of the Caval Ridge mine, which will utilize expanded Hay Point port capacity created from this investment.”

The Daunia mine project, the Hay Point Coal Terminal and the Broad- meadow mine are operations of the BHP Billiton Mitsubishi Alliance, a 50:50 joint venture between BHP Billiton and Mitsubishi Development Pty Ltd.