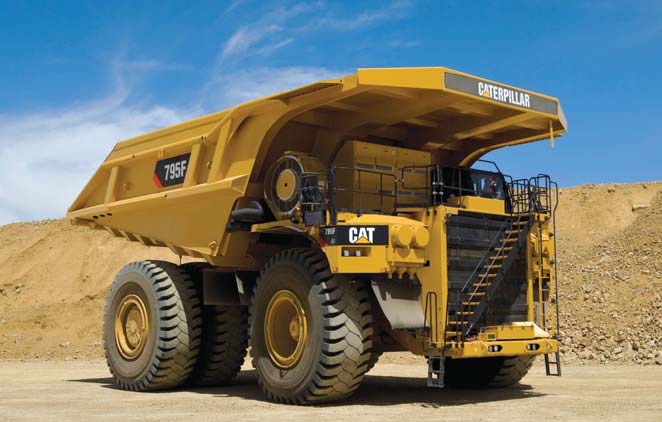 Caterpillar plans to increase its 2011 build rate for its new electric-drive 795F AC trucks by more than 40% to
meet market demand. Cat is spending $700 million to start up a new shovel line and expand truck production
After a seven-year hiatus, Caterpillar Inc. has decided to re-enter the mining shovel market and will produce a line of hydraulic shovels spanning the 125- to 800-ton operating weight classes.

Cat said it will use its factory in Aurora, Illinois, USA, for initial shovel production and is studying additional production sources in other parts of the world. It will begin pilot production of the 125-ton class shovel in early 2011, with commercial units expected to be available later in 2011. Commercial availability of the larger shovels is planned for 2013–2014.

The five-shovel lineup, said Ed McCord, Caterpillar Global Mining's shovel/truck product manager, will provide appropriate pass-matching for Cat's range of mining trucks, starting with three-pass capacity for its smaller, 60- and 100-ton-payload trucks and up to five passes for its 400- ton-payload 797F.

The move into mining shovel production was included in an announcement by Cat on June 17 that it was planning a series of equipment-related investments over the next four years totaling almost $700 mil- lion. As part of this investment strategy, it is accelerating previously announced capacity expansion plans for truck produc- tion at Decatur, with additional capacity expected to come on line in 2011. The expansion in Decatur will increase truck capacity at the facility by nearly 30%.

In addition, Cat plans to more than double production capacity for the 60-ton 773E and 100-ton 777D trucks at its fac- tory near Chennai, India. This expansion should be completed by early 2012.

Caterpillar also reported on the status of its new electric-drive mining trucks. The company aid it currently has pilot units of its 345-ton 795F AC at customer sites for final evaluation, with commercial produc- tion set to begin in late 2010. According to the company, initial interest in the 795F AC has been strong, and the company has increased its planned build rate for 2011 by more than 40% to meet demand. In early 2012, the company also plans to pro- duce pilot units of the 240-ton-payload 793F AC truck.

During a telephone conference with mining press editors on June 24, Chris Curfman, president of Caterpillar Global Mining, said the company had been study- ing the possibility of re-entering the shovel business for some time and made the deci- sion to move ahead in January 2010. "We're on a pretty accelerated time frame, but I think the timing for us is good," he said. "[Mining companies] everywhere are looking out two and three years on green- field mine expansions, and our customers have told us they want a Cat truck/shovel combination.

"If you look at what's happened with hydraulic shovels over the past five to 10 years, they've taken over the lower end [of the shovel market] from the big electric shovels."

McCord said the shovel development program "will build on the foundation of our 5000 Series experience. The youngest of the 5000 series shovels is now a little over six years old. Customer commentary has been favorable on the 5000 series, and the problems that existed early on in the program were addressed. A good por- tion of the original 5000 series production units are still operating.

"But technology has moved on since we built the last 5000, and we will be incor- porating the latest in structures and hydraulics in the new products," McCord said. Models will be offered in both back- hoe and front shovel configurations, he said, and will incorporate a strong empha- sis on modular design for quick and effi- cient field assembly and repair.

The development program will draw on both in-house and outside expertise, simi- lar to the approach Cat took when it began development of electric-drive trucks, he explained. "We will have a high degree of integration, starting with engines, under- carriage and hydraulic components designed and produced by Cat. We will use some components from outside—we're currently determining which we'll manu- facture and which we'll purchase."

Cat began producing its 5000 series mining shovels—the 5130 and 5230—in the early 1990s, culminating with the introduction of the 361-ton 5230B in 2001. However, the company exited the market in 2003 and subsequently has allowed its dealers to sell and service the Terex O&K line of hydraulic excavators. Terex's mining-equipment business was purchased by Bucyrus International earlier this year for $1 billion in cash plus 5.8 million shares of Bucyrus common stock.