New Wheel Loaders Roll Ahead to Higher Reliability, Improved Productivity
A steady rise in new-model bucket capacities has leveled off in recent years, but the latest loaders offer unprecedented refinement and power to handle a wide range of work
By Russell A. Carter, Managing Editor 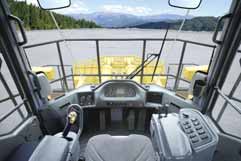 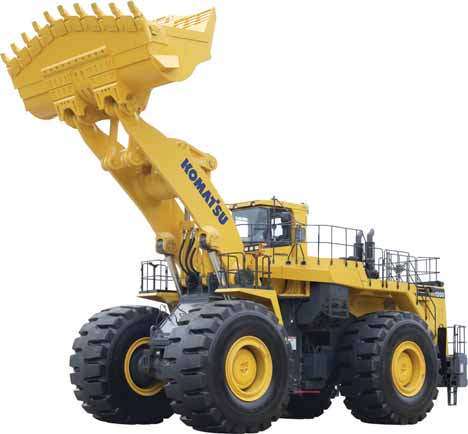 Beginning in the early 1960s when 6- yd3-capacity articulated loaders were introduced to the mining and construc- tion markets—and customers started clamoring for ever-larger machines— wheel loaders have steadily carved a sig- nificant niche for themselves in mine operations as improvements in their ver- satility, reliability and capacity continued to keep pace with industry demands.

Although mid-sized and smaller load- ers are often seen on-site today when there's utility or infrastructure work to be done, mining is the prime domain of "big" wheel loaders, ranging in size from gargantuan, such as LeTourneau Tech- nologies' electric-wheel-drive L-2350 (2,300 hp / 80-ton payload) to the mere- ly huge, including LeTourneau's next- largest model, the electric-wheel L-1850 (2,000 hp / 50-ton payload) along with the mechanically driven Komatsu WA1200 (1,715 hp / 40-ton payload) and Caterpillar 994F (1,577 hp / 38-ton payload). Recently, both Komatsu and Cat announced upgrades and improve- ments to their flagship loader models.

Depending on site conditions and pro- duction requirements, wheel loaders are capable of handling duties as diverse as primary excavation and/or loading, tem- porary backups for shovels and stockpile and dump maintenance, among other tasks. However, to generate true value for the operation, wheel loaders must match their high level of versatility with an equivalent level of availability.

That is the driving force behind Komatsu's newest loader—an upgrade to its largest model, the WA1200—accord- ing to Rich Smith, product manag- er–mechanical drive equipment for Komatsu America Corp.

The math is simple, said Smith. With WA1200s being used as primary truck loaders in operations ranging from Appalachian coal mines in the United States to the iron ore operations of Western Australia, uptime is paramount. "If you're operating a fleet of 10 trucks and one of them breaks down, you've only lost 10% of your production capa- bility. If the loader breaks down, you've lost 100%," he said.

The new WA1200-6, which has been extensively tested at an active mine site and was announced just before this issue went to press, won't be available for delivery until early 2011 but will offer customers new levels of productivity, fuel economy and reliability, said Smith. Although official specifications won't be released until later this year, the high- lights of the -6 include 26.2-yd3 stan- dard bucket capacity; a new, EPA Tier II emissions-compliant diesel engine, improved integration of engine and trans- mission for performance and economy; higher reliability of major components; larger standard tires; and enhanced oper- ator environment and serviceability.

The new loader will maintain its pre- decessor's dual active work mode capa- bility, and will monitor and automatically adjust engine rpm to suit changing con- ditions. Other modifications, said Smith, include a move to variable displacement steering pumps, for example, to better manage parasitic power loss in the hydraulics. Also included as standard equipment will be a payload meter with register and tracking functions.

Service weight for the -6, at 216,000 kg (476,000 lb) will be about 5% more than its predecessor, the WA1200-3, mainly due to a more robust frame as well as improved ladder access, external deck- ing and handrails. Although breakout force rating is the same as the -3, the -6 will be considerably more stable with stat- ic tipping load rating increasing by sever- al thousand kilograms. The WA1200-6 will offer significantly higher air cleaner capacity, along with ground-level service points, said Smith. Komatsu's wireless VHMS (Vehicle Health Monitoring System) is being renamed Komtrax Plus throughout the product line and is includ- ed on the -6, accompanied by a new, more intuitive operator display inside the cab.

The loader will be powered by a Komatsu SSDA16V160E-2 engine, a product of the Komatsu/Cummins In- dustrial Power Alliance engine joint ven- ture. The loader will built at Komatsu's Ibaraki plant in Japan, which opened in 2007 and is dedicated to production of large mining equipment mostly for export.

Komatsu's line of mining-class load- ers extends down to the WA900-3EO, rated at 17-yd3 standard bucket capaci- ty, and the 14.4-yd3 capacity WA800- 3EO, which in standard configuration matches well with the 65- to 100-ton- capacity haul truck range. In the high lift version, the WA900 works well with 150- ton trucks, said Smith, and is quite pop- ular with mining contractors operating truck fleets in the 100- to 150-ton range. 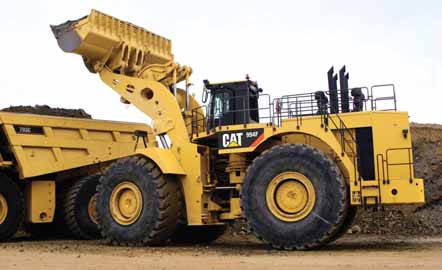 The EHL Option consists of new lift arms, lift and tilt cylinders, tilt links and counterweight material, which is added to the interior of the rear bumper. New 994F wheel loaders also have structural changes to both the front and rear frames for better durability. An EHL kit for retro- fitting 994F wheel loaders already in the field will be available later this year.

The additional lift height allows the operator to back away from the truck with- out racking back the bucket, providing the potential for faster cycle times. The additional lift also enables the operator to dump the last pass without pushing mate- rial. Centering the load is easier, too, according to the company, which reports that in a truck-loading test with the new linkage, cycle time decreased 5.5%, resulting in a 5% increase in production when working with Cat 793 haulers. The 994F equipped with EHL linkage is rated at 35 tons (32 metric tons) and is a seven-pass match with the 793.

Cat's mining-class loader line extends from the 994F—sized to match with 200- to 250-ton trucks—down to the 980H, which is popular in aggregate operations but rarely employed in larger mine production applications. The next largest model after the 980H is the 988, first introduced in 1963 and used exten- sively in quarrying and some small-mine or thin-seam coal loading applications.

Caterpillar announced an update for the 988H in April. This version, intended for use with trucks in the 50- to 60-ton range, incorporates a number of improve- ments in engine controls, hydraulics and other areas. For example, the 988H now provides a total of three programmable fuel-efficiency features: the Fuel Management System (FMS), Auto Idle Kickdown (AIK) and Idle Shutdown.

The FMS, standard on the model since June 2007, allows customers to set machine parameters to match production demands. This is accomplished through three modes of operation—Full Power mode (FMS not engaged), Balanced mode and Maximum Fuel Saving mode. By choosing either the Balanced or Maximum Fuel Saving mode, the operator can set the machine to automatically reduce engine speed and hydraulic flow when the 988H is outside its dig segment, adding up to 15% in potential fuel savings.

The AIK feature, new for this update, temporarily reduces engine speed to save fuel after the loader hasn't been actively operated for a period of time. The system automatically resumes engine speed to the previous setting when the operator engages the implement control pod or the F-N-R switch or the STIC Steer. The Idle Shutdown feature, also new, auto- matically shuts down the engine after the machine has been in a safe idling state for an extended time. The operator receives an in-cab audible/visual warning before the engine shuts down.

An optional Payload Control System (PCS) 3.0 helps the operator fill trucks with payload accuracy to within ±1%. The new system, according to Cat, requires calibration only once per year, provides a simple interface and an intuitive graphic display. PCS 3.0 can record details such as material, date, time, number of passes and ticket number, for up to 1,000 truck- loads and can identify up to 50 trucks.

The current 990H model, introduced in 2006, replaced the 990G Series II and, equipped with a 627-hp, 12-cylin- der C27 engine, impeller clutch torque converter and Rimpull Control System, has the power and traction to aggressive- ly dig and load from faces or banks. It is normally paired with 60- to 70-ton trucks; a high-lift arrangement enables it to work with 100-ton trucks as well.

Cat introduced a new loader, the 993K, in 2007 and at the same time, replaced the 992G model with the 992K. The 993K was a completely new machine designed from the start to be a fully capable mining-class loader, according to the company, and is sized to work with 100- and 150-ton trucks. Built on an all-new platform, the 992K's com- bination of Z-bar linkage, hydraulics and power train provides up to 20% more breakout force than the 992G, according to Cat, and the 950-hp C32 engine gen- erates 19% more power—with a 5% increase in fuel efficiency—than the 3508B engine used in previous models. Because the C32 also powers several other Caterpillar mining machines, the 993K offers the possibility of simplified parts inventory management.

Looking at the Lower End
Moving down the loader capacity spec- trum, Doosan's new 5.2-yd3-capacity DL420 loader comes equipped with a larger, more powerful diesel engine than the model DL400, which it replaces.

The 49,163-lb DL420 is powered by a six-cylinder, turbocharged Cummins QSM11 electronically controlled diesel rated at 280 hp at 2,000 rpm with maxi- mum torque of 1,070 lb-ft at 1,400 rpm. The operator can choose between two working modes (standard or economy) for either maximum productivity or minimum fuel consumption. Its Z-bar lifting system provides standard bucket breakout force of 47,210 lb, which Doosan says is among the highest in its size class.

The DL420 features a full powershift transmission with manual and automatic modes. Standard limited slip differen- tials on both the front and rear axles assure positive traction in wet or soft con- ditions. Hydraulically controlled, multi- plate wet disc brakes and dual brake cir- cuits provide positive braking power. A spring-applied/hydraulically released (SAHR) parking brake is mounted on the transmission shaft to prevent the loader from rolling after engine shut down. An optional electric-powered emergency steering system backs up the hydraulic power steering system in case of a mal- function and a safety device prevents starting the engine when not in neutral.

A new integrated monitoring system displays information about the loader's engine and transmission, including serv- ice intervals for each filter and the engine oil. The monitoring system also provides service fault codes to the operator without the need to hook up a PC. Codes can then be reported to the dealer's service techni- cian, saving diagnostic time and reducing expense. In addition, the integrated mon- itoring system allows the transmission to be tuned by the operator without the assistance of a mechanic. All routine maintenance on the DL420 can be per- formed from ground level.

In May 2009, Kawasaki Construction Machinery, a subsidiary of Kawasaki Heavy Industries, launched its new 92ZV-2 wheel loader, rated at up to 6.6 yd3 bucket capacity. At the time of its introduction, the company stressed that this new model wasn't simply a "stretched" version of a predecessor, but a ground-up redesign aimed at achieving best-in-class status.

Among its feature highlights are a Cummins QSM11, certified Tier III emis- sions engine, providing 284 hp and a 47% torque rise; KCM's Efficient Loading System, designed to reduce fuel con- sumption while enhancing productivity; an idle management system for faster warm-ups and lower extended idle speeds; and a Fuel Efficient mode that allows the operator to select the most efficient power setting for the job. KCM said all of its loaders offer a high degree of structural integrity, and the 92ZV-2 expands on this concept with a full box section frame, heavy center pins and support structures.