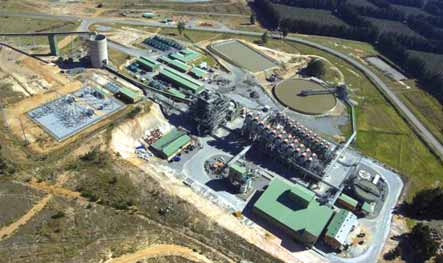 Everest production is expected to total 120,000 PGM oz (platinum, palladium, rhodium and gold) during Aquarius' fiscal 2011, ending June 30, 2011; 180,000 oz in fiscal 2012; and 200,000 oz/y after reaching steady-state production beyond that. Capital costs for the restart are esti- mated at R259 million. Impala Refining Services processes Everest concentrate under an off-take agreement with Aquarius.

The Everest orebody is a well-defined, elongated basin-like structure of UG2 Reef lying beneath a hill and extending from surface to a depth of around 250 m at the deepest point. The subsidence that led to the suspension of operations was limited to a portion of the access decline. Stoping and development areas were not affected and have been re-accessed by establishing two new access declines, one north and one south of the original decline. The north decline is a three-shaft system for men, trackless equipment, and a conveyor belt. The south system is a single shaft with a steel prefabricated tunnel for ventilation and men and material access.