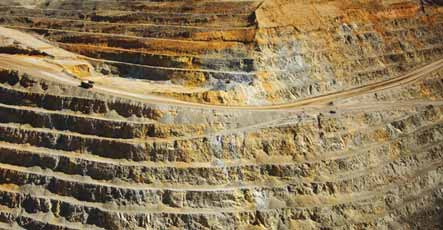 Xstrata's $1.47-billion Antapaccay copper project will use some infrastructure facilities at the company's operat-
ing Tintaya mine, but will have its own 70,000-mt/d concentrator. The Tintaya pit, shown here, will be used to store
tailings from Antapaccay, which is scheduled for commissioning in 2012. (Photo courtesy of Xstrata)
The board of Xstrata plc has approved invest- ment of $1.47 billion to develop Xstrata Copper's Antapaccay open-pit copper project in the Yauri district of Espinar province, southern Peru. Antapaccay is located about 10 km from Xstrata Copper's existing Tintaya open-pit copper operations and is scheduled to come into production in 2012, coinciding with the end of mine life at Tintaya.

The Antapaccay project will benefit from some of Tintaya's infrastructure but will include a new, 70,000-mt/d concen- trator that will incorporate Xstrata's stan- dard concentrator design, which reduces engineering and capital costs and mini- mizes long-lead delivery times. Antapaccay production will average 160,000 mt/y of copper in concentrates for the first six years of operation. Concentrate will be transported by truck to Matarani Port for shipment to customers worldwide. Based on current mineral reserves, mine life is projected at a minimum of 20 years.

Existing Tintaya operations include a concentrator and SX/EW plant that, com- bined, produce about 100,000 mt/y of copper in concentrates and cathodes. The remnant Tintaya open-pit will be used to store tailings from Antapaccay. Antapaccay's production costs, at $0.90/lb of copper including byproduct credits, will be significantly lower than those at Tintaya as a result of lower mine strip ratios, economies of scale, and pro- cessing through the modern concentrator.

In August 2009, Xstrata Copper up- graded its mineral resource estimate for Antapaccay to 720 million mt at a grade of 0.56% copper, plus gold credits, using a 0.2% copper cut-off grade. A total of 163,000 m has been drilled at Anta- paccay, including 90,000 m of historical drilling conducted prior to Xstrata's acqui- sition of Tintaya from BHP Billiton in June 2006.

Construction of Antapaccay has begun and commissioning is scheduled for the second half of 2012. Key contracts are already in place with Bechtel, Siemens and FLSmidth, and the first major delivery of crushing and milling equipment is sched- uled for September 2010.

Xstrata's Las Bambas project, located about 100 km from Antapaccay, will bene- fit from some of Antapaccay's infrastruc- ture and will require an estimated capital investment of $4.2 billion. Production is being planned at 400,000 mt/y of copper. Antapaccay project development teams will move on to delivery of Las Bambas once Antapaccay is up and running.