Rio Tinto Investing $469 Million in Kennecott Eagle Mine and Mill 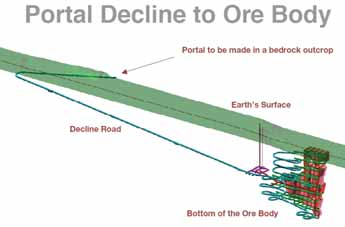 Nickel/copper ore will be hauled from the Eagle mine via a long decline by a fleet
of Caterpillar AD45B articulated dump trucks, each carrying a 45-mt payload.
(Courtesy of Kennecott Eagle Minerals
Kennecott Eagle Minerals Co. reported in mid-June its parent company, Rio Tinto, will invest $469 million to construct the Eagle nickel and copper project on Michigan's Upper Peninsula about 40 km west of the city of Marquette. The project includes development of a new under- ground mine, associated surface facilities for servicing the mine, rehabilitation of the existing Humboldt mill, and the develop- ment of a multi-use access road. Eagle will become the only primary nickel mine in the United States and the first new mining operation to be permitted and built in Michigan in decades.

The Eagle mine will produce separate nickel and copper concentrates, containing an average of 17,300 and 13,200 mt/y of nickel and copper metal, respectively, over six years. The mine will be accessed via a decline and mined at a rate of 2,000 mt/d by blast-hole stoping. Ores will be trans- ported by truck to the nearby Humboldt mill in Champion, Michigan, for milling and pro- cessing to produce concentrates that will be shipped to final refining facilities.

The Humboldt mill was constructed in the late 1950s by Cleveland-Cliffs and processed iron ore from the Humboldt mine until the mid-1970s. Callahan Mining later re-opened the mill to process sulphide ore from its Ropes gold mine until the late 1980s, and Mineral Processing Corporation assumed ownership of the mill in the 1990s, using it occasionally to process aluminum flux. Kennecott Eagle purchased the mill in September 2008.

Construction of the Eagle mine and mill will begin this year, with initial site prepara- tion and civil work at the mine site and dem- olition work at the mill. The main focus of work in 2010 will be con- struction of an ad- vanced water treatment plant and related envi- ronmental control sys- tems, as well as detailed engineering. Construction is slated to run through 2013, with production com- mencing in late 2013.