Coeur Starts Up Kensington, Some Concentrates go to China 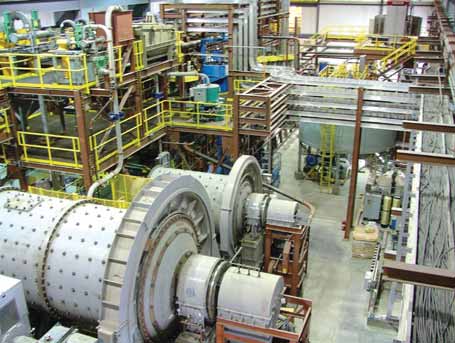 Production started ahead of schedule in June at Coeur d'Alene Mines' new Kensington gold mine in Alaska. The
Kensington mill, shown here, employs a combination of flotation and gravity concentration, followed by concen-
trate regrind and cleaner flotation. (Photo courtesy of Coeur d'Alene Mines Corp.)
Coeur d'Alene Mines Corp. started produc- tion at its new Kensington gold mine 45 miles north-northwest of Juneau, Alaska, in late June 2010. In parallel with the start- up, the company announced it had entered into a contract for sale of approximately half of the gold concentrates produced at Kensington to China National Gold Group Corp., China's largest gold producer. The contract is the first of its kind between a state-owned corporation of the People's Republic of China and a U.S. precious metals mine.

Kensington is expected to produce about 50,000 oz of gold during the remainder of 2010 and an average of about 125,000 oz/y over an initial mine life of 12.5 years. Once in full production, cash costs are expected to average approx- imately $490/oz over the life of the mine. Kensington currently has proven and prob- able gold mineral reserves totaling 1.5 mil- lion oz in ore grading 0.27 oz/mt.

Construction and startup at Kensing- ton followed a prolonged permitting process, during which environmental groups challenged the use of Lower Slate Lake as the disposal site for the mine's tail- ings. The U.S. Supreme Court approved the permit for the tailings disposal facility in June 2009. At that time, the facility rep- resented the only remaining construction item required for completion of the project. Approximately 40% of the tailings will be recycled back into the mine as fill.

Kensington is an underground mine accessed by a horizontal tunnel. The pri- mary mining method is longhole open stop- ing, with drift-and-fill mining used in a flat- lying, higher-grade zone. In some areas, stoping will begin with initial sill develop- ment, followed by uphole drilling and blasting to recover localized high-grade ores. Gold recovery at an on-site plant is by a combination of flotation and gravity con- centration, followed by concentrate regrind and cleaner flotation.

Gold at Kensington is hosted in multi- ple mesothermal, quartz-carbonate-pyrite vein swarms and discrete quartz-pyrite veins. The veins and vein swarms occur in several north-south trending zones that dip steeply to the east. Mineralization has been defined over a vertical extent of more than 2,500 ft. Gold occurs predominantly as gold-telluride minerals, such as calaverite, and as inclusions in pyrite.

On May 25, 2010, Coeur reported it had been recognized by the International Society of Mine Safety Professionals with seven national and international safety awards at its operations in North and South America for reporting periods ending in 2009. The Kensington project was recog- nized for two years and 218,061 employee hours worked during project construction without a lost-time accident. Coeur's Rochester mine in Nevada and Martha mine in Argentina, and its exploration groups in Mexico, Argentina and Chile also recorded either no lost-time accidents or no accidents at all over reporting periods ranging up to four years.