Haul Truck Operator Training at the Esperanza Mine Project
A three-pronged approach to selection and training provides an 80%-plus success rate
By Rodrigo A. Díaz Bórquez 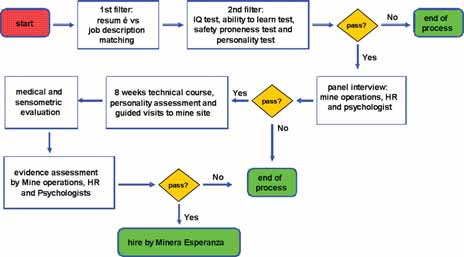 Figure 1-Recruiting process flow sheet.
The Esperanza copper-gold project, situated in the Sierra Gorda district of Antofagasta, northern Chile, is jointly owned by Antofagasta Minerals (70%) and Marubeni Corp. (30%). Management understands that, as the first low-grade sulphide copper-gold project in Chile, development of an effective training process for unskilled labor is a strategic task for constructing its company culture and achieving productivity targets.

The training process at Esperanza includes extensive use of simulators and relies heavily on feedback relative to behavior and culture from the instructor to the apprentices. This article describes the results obtained from training 59 apprentices in haul truck operation. The process was 6.5 months long and its success rate was 81%—determined by the fact that 48 students qualified as truck drivers, capable of operating with minimum supervision; five students needed close supervision to operate but were expected to qualify after extended training; and only six students failed to qualify.

Training at Esperanza is based on three main tasks: Knowledge and skills development, behavior development and simulator use.

Prior to the training stage, worker recruiting was conducted using a competency model, illustrated in Figure 1, which included filters, technical instruction and a personality assessment.

The process, which began with CV review and filtering due to the large number of candidates, focused on graduates of Chilean technical high schools located in the same region as the mine, with physical health status compatible with a mining job. Applicants that met these criteria were then given psychological testing to determine learning ability, safety awareness and overall personality. 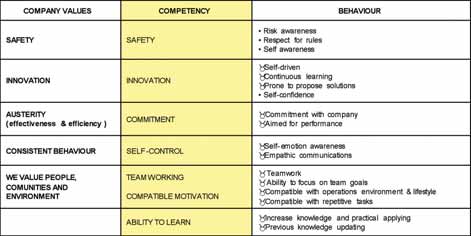 Table 1-Competency dictionary.
Successful candidates then attended eight weeks of technical training in hydraulics, electricity and diesel engines at CTM, a training institution associated with Arturo Prat University, as part of an agreement between the mine and the institute that illustrates Esperanza’s commitment to local training and hiring. A detailed personality assessment and a panel interview conducted by staff from mine operations and a psychologist led to final apprentice selection.

A competency dictionary (Table 1) was used for recruiting. This tool allowed Mine Operations and Human Resources departments to agree on what personal skills to look for in candidates. The process was supported by a psychology professional, which was essential for describing valuebased behavior in such a manner that could be observed in practice with limited subjective judgement. Instructors were specifically trained by an organizational development psychologist in the use of the competency dictionary for behavior evaluation.

Truck Driving Training
After recruiting, the training in truck operation is divided in two stages. The first stage goes from zero to 600 hours of operation and the second goes from 600 up to 2,000 hours. The focus of the first 600 hours is on developing the basic knowledge and skills to operate ultra class haul trucks in productive tasks with a required safety standard. A flow sheet of the training process is presented in Figure 2.

Figure 2-Truck operator certification process.
After the first 600 hours the emphasis is upon increasing operator productivity. The students that complete a skill checklist qualify as certified truck operators. The time to achieve the certification varies because learning speed among people is different, but it is expected to occur when students reach 2,000 hours of operation. The skills checklist is focused on productivity and includes:
• Perform maneuvers at both sides of shovel at loading face in less than 15 seconds.
• Understand and explain the systems of the truck and how they work.
• Understand and explain how production is measured and how to control it.
• Explain how production is related to tire lifetime.

The discussion in this paper is focused on the first 600 hours of training because in this stage the students learn, from an almost zero starting point, how to operate a truck in productive operations.

Operator training is based on three tasks. The last two run in parallel:
Knowledge and skill development: Technical knowledge is acquired using a training manual. This manual integrates the OEM technical guide with Esperanza operation procedures and safety culture. Skills are developed through supervised practical experience. Initially, an apprentice will spend hours in the cab’s spare seat, gradually moving to the driver’s seat—under supervision of an experienced operator— after gaining experience at the simulator and completing a test drive at the training course in a real truck. Apprentices will not operate the truck without supervision until they complete their simulator assignment and the instructor assesses their practical skills with a checklist.
Operation at simulator cabin: At the simulator, apprentices gain experience using trucks in productive operations, but in a virtual world. This provides a chance to increase operator self-confidence in positioning the truck at the shovel and when dumping. Students practice at the simulator through many sessions during their training process. To successfully complete their assignment, students must control operation emergencies and they must score zero critical errors.
The emergency control part of the assignment consists of successfully overcoming a break failure, an auto-retarder failure and an engine fire. The second part of the assignment consists of reducing critical errors to zero during a given simulator session. To understand what a critical error is, it is necessary to explain the simulator contains a list of warnings stored in the software that are triggered during the simulation to alert that truck operation is out of the normal parameters. Critical errors are the subset of all errors, which are classified as ‘critical’ because they can produce a major accident or breakdown. Critical errors are written on a list that is previously known by students.br/> Behavior development: The instructors evaluate and provide personal feedback for all of their students using a behavior development checklist. This feedback is provided through interviews that take place in the middle of the training process and at the end of it, and is based on 20 specific behaviors related to safety, learning skills and teamwork. This strategy gives the students the opportunity to work on their individual problems. All instructors were trained by a professional in order to improve their feedback skills, enabling them to base feedback strictly on facts and observations but also to provide it in an empathic way.

Completion of the three tasks takes up to six months and when finished, trainees are assumed to be capable of operating a truck in production without direct supervision.

Testing Skills, Evaluating Progress
All apprentices in the process scored 100% in technical knowledge testing covering topics that include safety, truck technical specifications, controls and instruments and operational procedures. The testing process is iterative: instructors focused on items not satisfactorily mastered in previous iterations until candidates achieved 100% success. This process ensured that trainees have sufficient knowledge of the truck before operating it—and that they are familiar and comply with Esperanza’s specific requirements.

Development of practical skills is achieved through supervised operation (Table 2).

This tool also makes it possible to provide precise and focused feedback to students in relation to their skill gaps. 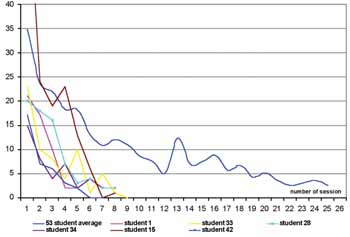 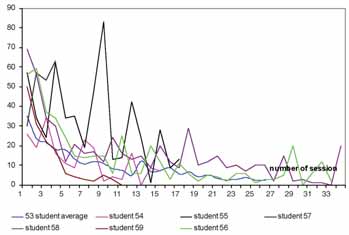 Figure 5-Critical-error evolution.
Simulator Tool
The rate of skill development during simulator training is shown in Figure 3, which compares the number of errors per simulator session. The average number of errors during the first three sessions is compared with the average in the three last sessions. Because people learn at different rates, some apprentices require only a few sessions to decrease their error rate, while others show a slower but consistent decrease in errors.


Simulator training decreased the number of total errors from 30 errors per session to six. Critical errors fell from 6.4 to 1.3. It is important to mention that the 1.3 value for critical error in the three last sessions is more a breakdown symptom rather than an error. This was generated when the students experienced an autoretarder failure, which the only way to detect it was through an abnormal increase in the engine RPM. 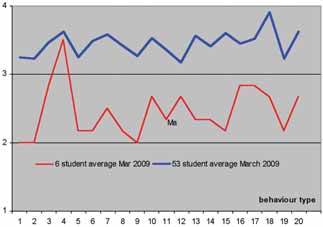 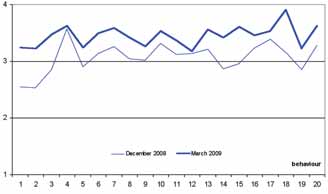 Figure 6-Behavior evolution..
Differences in learning velocity can be derived from Figure 4. The Y-axis shows the number of total errors and the X-axis the progress through sessions. The bold line shows students average total errors per session. Different color lines under the bold one, at the lower left corner of Figure 4, show the performance of some of the best students individually. This is a powerful tool to identify the best performing students in terms of relative learning velocity. Figure 4 also shows evidence that in average, the complete group of students improved performance at the simulator.

In Figure 5, the bold line shows the decrease in average total errors per session of all students. In contrast, thin lines represent the results at the simulator of some of the worst performing students. Instead of the fact that in the figure lower performing students showed progress in time, in reality their results at the simulator tended to be more erratic compared to those of their peers.

Assessing Trainee Behavior
Figure 6 shows the results of the behavior assessment carried out in December 2008 and its evolution compared to March 2009 (bold line). The X-axis shows the 20 different behaviors evaluated by mine instructors. The Y-axis shows the frequency in which the desired behaviors were observed. Results are presented as the average score obtained by all the students. Most of the students, on average, showed improvement in their behavior and culture after the instructor provided them standardized feedback.

These results show that behavior improvement is possible at every segment. In practice, most of the trainees showed improvement after an instructor provided standardized, unbiased feedback. 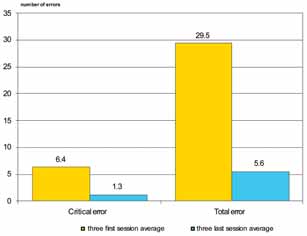 Figure 3-Error evolution per simulator session.
Final Score
The final outcome for the group of 59 apprentices who started the training process is that six trainees were not selected for contract extension, but 53 were hired. Hiring decisions were based solely on the results of the behavior assessment. The trainees not selected had poor results compared with those who were hired (Figure 7). In addition, there is a correlation between their behavior and other results: students who were not selected showed the worst performance at the simulator (erratic and with many errors, as shown in Figure 5), and most of them did not qualify at the simulator to drive a truck by themselves under no supervision.

Behavior and feedback are important components of a company culture. Providing supervision with standardized feedback tools supplies a significant source of evidence for the training process.

Regarding the use of simulators in truck driver training, we believe this technique contributes to improving truck driver training for the following reasons:
• It increases student confidence in a virtual environment before operating a real truck.
• It allows students to practice and measure truck operating procedures before driving a real truck.
• It exposes apprentices to operation emergencies that cannot be reproduced in a real truck.
• It improves truck operation practices by decreasing the number of errors in operation.
• It provides a reliable source of evidence for the labor training process.

Trainees who now operate trucks have achieved an excellent safety and production record, with few significant incidents and productivity of about 80% of the TKPH achieved by experienced operators.

Diaz is the mine training leader for Antofagasta Minerals’ Minera Esperanza (rdiaz@mineraesperanza.cl). He originally presented these findings at the 2009 Haulage & Loading conference. He has subsequently updated his work and plans to present those findings again at MININ 2010, which will be held during late June 2010 in Santiago, Chile. This article was adapted from both presentations.