America Mourns the Loss of UBB Miners; Massey Energy Prepares to Defend Itself 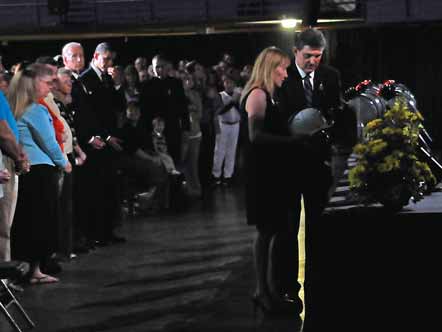 West Virginia Gov. Joe Manchin escorts a widow as U.S. President Obama and Vice President Biden look on.
More than 2,000 gathered for a memorial service in Beckley, West Virginia, for the miners who perished in the worst U.S. mining accident in 40 years. The remains of the four missing miners from Upper Big Branch (UBB) mine were located early Tuesday morning on April 13, 2010, bringing the total fatalities to 29. The miners were killed in an explosion that occurred at shift change during the afternoon of April 5. Massey Energy’s UBB mine is a longwall operation located in southern West Virginia near the community of Montcoal.

Before the miners could be laid to rest, rumors began to spread and Massey Energy began to take heat from the press, stockholders, the United Mine Workers of America (UMWA), the Mine Safety & Health Administration (MSHA), even U.S. President Barack Obama. Activist shareholders were calling for Massey Energy CEO Don Blankenship to step down. The company’s board showed support for the embattled and sometimes controversial mining executive. Massey Energy issued several press releases trying to set the record straight.

West Virginia Gov. Joe Manchin and first lady Gayle Manchin hosted a public memorial service Sunday, April 25, in honor of the miners. President Obama and U.S. Vice President Joe Biden attended and offered condolences at the memorial service along with several state politicians and regional dignitaries. As the names of the miners were read aloud, Gov. Manchin escorted the families forward to place a hard hat on each of the 29 crosses that sat before the pulpit.

“How can we fail them?” Obama asked. “How can a nation that relies on its miners not do everything in its power to protect them? How can we let anyone in this country put their lives at risk by simply showing up to work; by simply pursuing the American Dream? We cannot bring back the 29 men we lost. They are with the Lord now. Our task, here on Earth, is to save lives from being lost in another such tragedy; to do what must do, individually and collectively, to assure safe conditions underground to treat our miners like they treat each other—like a family. Because we are all family and we are all Americans.” At the end of the service, the lamps were lit, one by one, as the choir sang the hymn, “This little light of mine.”

At the U.S. Department of Labor’s request, an independent team of occupational safety experts will examine the process and outcomes of the MSHA’s internal review in the wake of the explosion. Both the MSHA internal review and the independent analysis of that review will be made public.

After the memorial service, Massey Energy held a press conference in an effort to rebut many of the allegations that the company said were simply untrue and unfair. The company has launched a Web site (www.MasseyUBB.com) to provide an archive of information about the UBB explosion.

The industry expects a huge political fall out from this tragedy. Already, the U.S. Senate Committee on Health, Education, Labor and Pensions convened a hearing and listened to testimony from several sources.