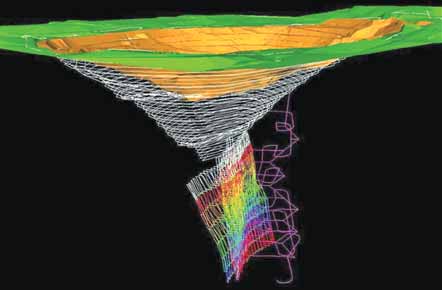 Preliminary open-pit and underground mine design for the $72-million Siana gold project. (Courtesy of Red 5)
Red 5 Limited, a Western Australiabased gold exploration company listed on the ASX, has awarded TWP Australia the EPCM contract to develop the plant and associated infrastructure at the Siana gold project in the Surigao gold district of the Philippines. Red 5 holds a 90% interest in the project.

TWP Australia said it has commenced preliminary engineering work and reviews, including optimization of the project schedule. Red 5 Limited said the project schedule is based on a fast-track approach with design/engineering, fabrication/ equipment supply and construction all overlapping in the shortest possible time frame, and is expected to take approximately 17 months from the award of the EPCM contract to first gold production.

In July 2009, Red 5 Limited’s board approved the Siana open-pit and underground bankable feasibility study using a base case gold price of US$800/oz. The study predicted production from known resources of up to 849,000 oz/y over a 10-year operating mine life at a cash cost of $351/oz. Funding requirement to sustainable positive cash flow was forecast at $72.5 million, comprising $56.5 million in capital development to first gold pour, weighted capital contingency of $6 million and working capital for the first six months of operation of $10 million.

Underground development costs, according to the study, will be funded from cash flow. Total life of mine costs, including capital, average $473/oz. Ore reserves are estimated to 400 m vertical and the mineral resource to 500 m vertical. The orebody remains open at depth and to the north and south.

The study recommended exploiting surface-accessible mineralization using conventional open-pit mining techniques. Benches will be blasted in 5-m lifts but excavated at 2.5-m intervals using a hydraulic excavator loading articulated dump trucks. These units allow a pit ramp slope of 1:8 to be incorporated in the design which extends to a maximum depth of 215 m below surface.

Past production from underground and open-pit operations totaled approximately 4.9 million mt at an average grade of 6.3 g/t gold. An existing flooded pit will be dewatered in two stages using in-pit pumps. Stage 1 will progressively dewater the pit ahead of the pre-production waste cut-back using pontoonmounted electric drive pumps, with power from the main grid. Boreholes will be located at the southern end of the pit to dewater the southern limestone which historically was a major source of groundwater inflow. Smaller bores will also be installed to depressurize and stabilize the eastern pit wall. Stage 2 involves ongoing pumping from the bores and in-pit sumps.

For the planned underground operation, a range of six production scenarios was considered, ranging from 250,000 to 500,000 mt/y using either conventional jumbo drill-and-blast or road headers for waste and ore breakage. The preferred option utilizes road headers with targeted annual production of 300,000 mt from the Probable Reserve of 1.94 million mt at 5.8 g/t Au and 9.1 g/t Ag. Stope design is based on a minimum mining width of 4 m, allowing twin-boom jumbos or smaller road headers to be used. Mining will employ the underhand cut and fill method using small open spans during the development cycle and cemented paste fill in voids created during the production cycle in order to support the rock mass. Initial access would be via a 5 x 5- m decline at 1:7 gradient commencing from a portal off the new open-pit approximately 125 m below surface.