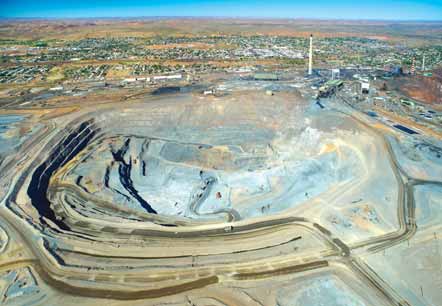 Xstrata Zinc intends to deepen the Black Star pit in Queensland, Australia, by 100 m to add approximately
14 million mt of ore and extend mine life to 2016. (Photo courtesy of Xstrata Zinc).
Xstrata Zinc announced on March 30 plans for an A$133-million project to deepen the Black Star open cut mine at its Mt. Isa operations in Queensland, Australia. The project would extend mining at Black Star to 400 m below ground surface, 100 m below the current design; add about 14 million mt of ore to the mine’s production profile at a production rate of up to 4.6 million mt/y; and extend mine life to 2016. A feasibility study of the project included detailed geotechnical analysis and studies into air quality, noise, vibration, and surface and ground water.

The project is subject to external and internal approvals. A Mining Plan Amendment detailing plans for the development was submitted to the Queensland government in March 2010. The plan was to be submitted to Xstrata’s executive committee for approval in April.

Xstrata Zinc Australia COO Brian Hearne said, “ With the deepening of Black Star, we can maximize the significant resource potential it contains and maintain the mine’s current production profile. This would enable us to continue to fill the concentrator to its expanded 8 million mt/y capacity.”

Xstrata’s Mt. Isa operations are based on two separate mining and processing streams: copper and zinc-lead-silver. The zinc-lead-silver mining operations include the Black Star and Handlebar Hill open cuts and the George Fisher underground mine.