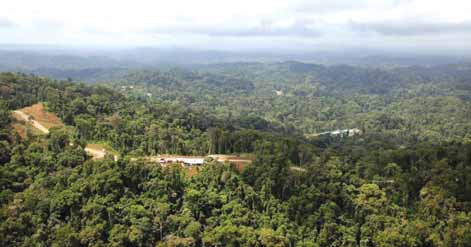 Also on March 31, Inmet announced a $500-million placement of subscription receipts to a wholly-owned subsidiary of Temasek Holdings, the investment arm of the government of Singapore. Proceeds from the placement will go toward development of Cobre Panama and general corporate purposes.

Project planning for Cobre Panama is based on proven and probable reserves totaling 2.1 billion mt grading 0.41% copper, 0.07 oz/mt gold, 1.43 oz/mt silver, and 0.008% molybdenum. Metal price assumptions are $2/lb copper, $750/oz gold, $12.50/oz silver, and $12/lb molybdenum. The indicative project timeline, which is contingent on receipt of permits and approvals, calls for start of construction in September 2011, start of mine pre-stripping in July 2014, completion of marine facilities in September 2014, first ore through the process plant in October 2015, and first concentrate shipments in January 2016.

The mine plan for Cobre Panama assumes a mine life of 30 years and includes three open-pits: Botija, Colina, and Valle Grande. At peak production rates, a fleet of 36, 360-mt-payload trucks will be loaded by four 55-m3- capacity electric shovels. Seven blasthole drills and 10 large dozers will be available to support production. An estimated 3.4 billion mt of material is expected to be mined within the pit limits at a strip ratio of 0.61:1, waste to ore.

Extensive metallurgical test work supports a conventional flow sheet that includes crushing, grinding, differential flotation, and filtration designed to process a nominal initial 150,000 mt/d of ore at a head grade of up to 0.7% copper and 0.013% molybdenum. An expansion to 225,000 mt/d is included in year 10 of operations to maintain a steady copper output.

The project will produce both copper and molybdenum concentrates. Metallurgical testing indicates that the concentrates will be of good quality, with no deleterious constituents. Copper concentrate will be pumped as slurry through a pipeline to the port site for filtration, storage, and loading onto ocean-going vessels for shipment to market destinations. The molybdenum concentrate will be dewatered at the mine plant site and bagged for delivery by truck to the port.