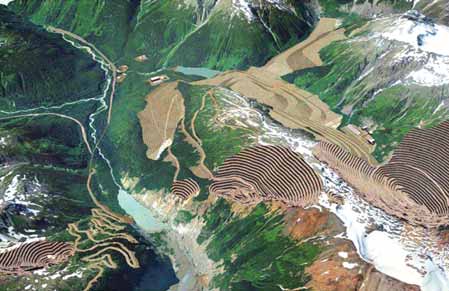 The study envisages an open-pit mining operation producing 120,000 mt/d of ore feed to a flotation mill that would produce a combined gold-copper- silver concentrate for transport by truck to the nearby deep-water sea port at Stewart, British Columbia. A separate molybdenum concentrate and goldsilver doré also would be produced at the processing facility.

Production would begin at the Mitchell deposit, to be followed by Kerr and then Sulphurets. At Mitchell, a near-surface, higher-grade gold zone would support gold production substantially above the mine-life average during the first five years of operation. Start-up capital costs, including contingencies of $394 million, are estimated at $3.37 billion.

Seabridge President and CEO Rudi Fronk said, “The PFS confirms the KSM project now hosts the largest gold reserve in Canada and one of the largest in the world. KSM is projected to provide an extraordinary mine life of more than 35 years with estimated cash operating costs well below the current average of the major gold producers. Estimated capital costs are in line with those of comparable, large-scale, undeveloped gold-copper projects, and KSM has the advantage of being located in a low-risk jurisdiction.”