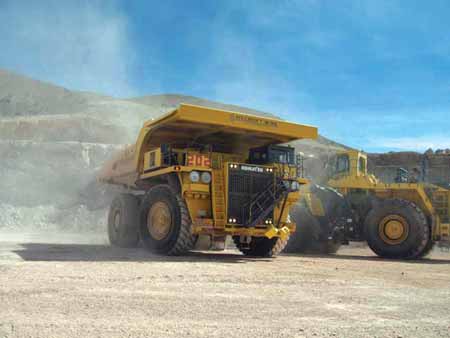 Allied Nevada Gold plans to increase production from its Hycroft mine’s heap leach operations to as much as
300,000 oz/y by 2013–14, and also is studying the possibility of increasing output even further by developing its
large sulphide ore resources lying underneath the oxide ore. (Photo courtesy of Allied Nevada Gold)

This diagram shows the arrangement of oxide and sulphide mineralization at the Hycroft gold-silver mine in
Nevada, along with the ultimate pit boundary (dotted line) for extraction of oxide ore.

At the same time, Allied Nevada reported receipt of a scoping study of development of Hycroft’s measured and indicated sulphide resources that contemplates production of 275,000 oz/y of gold and 6.5 million oz/y of silver from these resources. The oxides and sulphides would be mined concurrently upon completion of a sulphide milling facility. A feasibility study of sulphide development is planned for completion in the first half of 2011.

The new Hycroft oxide mine plan is designed to accelerate extraction of updated oxide reserves of 2.4 million oz of gold and 32.3 million oz of silver contained in 177.2 million st grading 0.014 oz/st gold and 0.18 oz/st silver. The mining rate will increase to 80 million st/y by 2012, including 37 million st of ore and 43 million st of waste. Approximately 30% of the ore will be crushed. The current oxide reserve is sufficient to support this mining rate until 2015; however, management is confident that ongoing exploration will continue to convert oxide resources to reserves, extending mine life.

Initial capital to implement the new oxide mine plan is estimated at $180 million, including a larger-capacity mining fleet ($130 million), leach pad expansions ($20 million), mobile crushing units ($14 million), and modifications to existing infrastructure such as the process plant and refinery ($12 million).

The Hycroft sulphide scoping study outlines an initial development scenario for large sulphide resources located directly beneath the oxides. Production from sulphides over a mine life of 12 years would average 275,000 oz/y of gold and 6.5 million oz/y of silver. Hycroft’s inferred sulphide resources were not considered in the scoping study; however, management is confident these resources will continue to be upgraded through additional drilling and metallurgical work.

The sulphide study indicates a large-scale, open-pit mining operation would be the most economic method of extracting the sulphide resource while simultaneously mining the oxide reserve. A 30,000-st/d milling and flotation process facility is currently the preferred processing option. The facility would include a primary crusher, semiautogenous grinding mill, two ball mills, and a flotation circuit. Capital cost to develop such a facility is estimated at $260 million.

Assuming favorable results from ongoing metallurgical testing, a larger, 80,000-st/d milling facility able to accommodate both oxide and sulphide material may be considered. Capital costs for such a facility are estimated at $680 million.