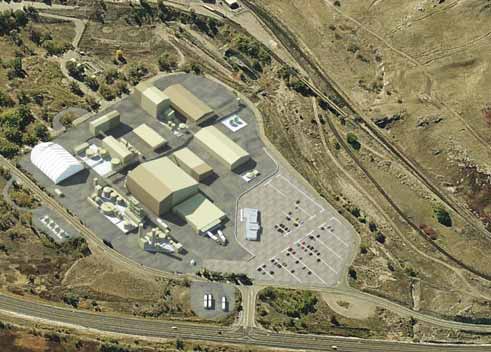 This rendering shows what the completed molybdenum autoclave facility at Rio Tinto’s Kennecott Utah Copper
operation will look like in 2015. The lighter shade represents the first phase, scheduled for completion in 2012.
The darker shade indicates the phase 2 addition, scheduled for completion in 2015. (Photo courtesy of Rio Tinto)
Kennecott Utah Copper announced in mid-April that its parent company, Rio Tinto, will spend $340 million to build a new Molybdenum Autoclave Process (MAP) facility in Magna, Utah, near Salt Lake City. The new facility, according to the company, will allow lower-grade molybdenum concentrate to be processed more efficiently than with conventional roasters, provide improved molybdenum recovery and operating flexibility, and enable production of metallurgical and higher chemical grade molybdenum products. MAP will also make it possible for KUC to recover additional by-products from its concentrate. The announcement comes about 18 months after KUC suspended work on a similar project that would have cost $270 million, with groundbreaking originally scheduled for November 2008. That plan was delayed due to the financial crisis that weakened the global economy in late 2008 and much of 2009, and to Rio Tinto’s increased focus on reducing its debt.

Kelly Sanders, KUC’s president and CEO, said, “The outlook for molybdenum demand is very strong, driven by the rapid urbanization and industrialization of China and India. The production of molybdenum and gold make KUC one of the world’s lowest cost producers of copper.”

The facility will be built in two phases. Construction of phase one has already begun between KUC’s smelter and refinery in Magna. First production is anticipated for the fourth quarter of 2012 with full production of 30 million lb scheduled for fourth quarter 2013. Construction of phase two, which adds additional production capacity totaling 60 million lb, is anticipated for completion in the first quarter of 2015. The MAP facility will process all of the molybdenum produced from the Bingham Canyon mine.

When completed, the facility is expected to produce molybdenum with fewer greenhouse gases than traditional roasting plants. It also includes a heat recovery system that captures excess heat from the autoclave for use in downstream processes. A combined heat and power (CHP) system, similar to the one being installed at KUC’s refinery, will also be used to produce steam to power most of the facility’s electrical requirements. This system will be capable of producing 6.2 MW.

Investment in the MAP facility is part of an overall plan to extend the life of the Bingham Canyon mine beyond 2020. Recent exploration at Bingham Canyon has identified a new copper-molybdenum- gold porphyry system 1,500 ft beneath the current open pit. The deposit is estimated to contain 450-550 million mt at a grade of 0.1%-0.15% molybdenum. The annular body of mineralization is estimated to extend more than 2,000 m beneath the pit, and remains open at depth.

The average grade of the molybdenum in the current open-pit reserve is 0.045% molybdenum. Current reserves are expected to enable open-pit operations to continue until 2020 with additional mineral resources potentially extending pit life to 2032.

It’s interesting to note that KUC has been producing copper, gold and silver since 1903 and molybdenum since the 1930s at Bingham Canyon—with recent annual moly output hovering around 30 million lb—but the extent of the newly announced moly mineralization was only recently recognized even though exploration drillholes had intersected the deposit decades ago. KUC attributes the discovery to a program that began in the 1990s to convert its existing geologic data to digital format, and to a better ability to visualize that data in 3-D provided by ever-increasing computer power over recent years.